It's finally here. World War Z is released on DVD in the UK today! Woohoo! I've been waiting for this film for ages (I think I saw the first rumours about the film back in 2008) and today I will finally watch it. I've managed to avoid all the reviews, all the spoilers and synopsis. What little I know is:
1) Some of it was filmed in Glasgow (I'm hoping this is the Battle of Yonkers.)
2) Brad Pitt's in it as some UN guy (presumably the Max Brooks/Narrator character from the book
3) From the rumours I couldn't avoid see zombies can run, climb and fly (which I'm assuming is some kind of joke. I mean, flying zombies? Well, its an interesting idea, sure, but would completly change the survival tactics humans would need to employ)

I'm going to pick up a copy of the film later, and this evening, finally, finally, I will get to watch it... 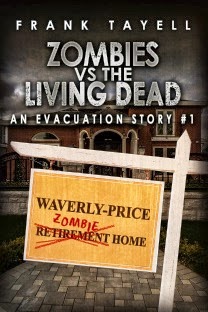 In honour of that, for today the short story Zombies vs The Living Dead will be free on Amazon.

Well, the promo is over and I hope everyone who downloaded the story enjoys it.

As for the movie... well... um... I think it would be fair to say that having waited so long to watch a film there was no way it could ever have met my expectations. After the initial shock wore off (and I went online to read a few reviews) I sat back and, after a while, actually enjoyed it.
As far as zombie films go it's actually good, isn't it, but as far as book adaptations go... Well I've found a comic that expresses it rather well, click here for World War Z comic from The Oatmeal.

Now I'm starting to worry about what the Hobbit will be like (I'm waiting until all three films are out before I watch them.)