I try and write all my stories "on location"... which was the perfect excuse to take a trip up to the viewing platform on the Shard. I took a lot of photographs of the route that Bill Wright took in his journey from Sydenham to London Bridge to Greenwich, but, sadly, the torrential rain and my own inexperience with photography led to most being... well, artistic would be the charitable way of describing them. I'm going to play around with them, see if I can make them viewable, but for now here are the first few. (click on the images to view them in full screen) 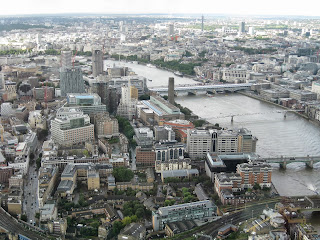 This is the view to the east of the Shard,The wide black tared road at the bottom of the image is London Bridge. The narrow bridge second from the top, is The Millenium Bridge (formerly the wobbly bridge) above that is Blackfriars, a railway bridge that has been newly refurbished, with exits either side of the Thames. The odd black panelling on the roof is actually solar panelling. 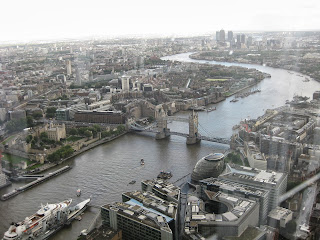 The view from to the west of The Shard. With Tower Bridge in the forground. On the north bank, east of Tower Bridge, is The Tower of London. Worth considering as a refuge if you are trapped in London during a zombie apocalypse.

This is the view to the south. In the top, silhouetted against the horizon, you should be able to make out two radio/tv masts at Crystal Palace, which is situated ontop of Sydenham Hill. Bill Wrights house is a short way down the hill.
Posted by Frank Tayell at 03:41