Book 2: Wasteland is due out in December.

When in December I'm not sure, but as the hours and days have been ticking past this week, my eyes have been increasingly drawn to my calender (and its rather fetching print of a cafe on the Seine), and I grow increasingly aware that December approaches (and how nice it would be to be in Paris right now) and the book is not quite ready.

I thought it was finished last weekend, but as I've been looking at my notes for book 4, set 10 years after the evacuation, I felt that something was... just not... it wasn't...well... It's hard to put my finger on it, but something didn't quite fit. I can't be more specific because it will ruin the plot of Book 2, 3 and 4 (and half a dozen short stories in between.) So you'll just have to take my word for it, that any delay is for the good of the narrative.

It will be out before Christmas, probably around the 10th December, unless I succumb and catch a train to France instead... the Eurostar isn't far from here, after all, not really much more than a short bus trip...
Posted by Frank Tayell at 05:30

OK, this is a better Haiku:

Billions everywhere,
Bitten, infected, they died,
They came back: Zombies.

Now, I really will get back to editing Book 2: Wasteland.
Posted by Frank Tayell at 13:24

Book 2 is almost here (or there, depending on your point of view). In the meantime, and since my brain is currently fried, I thought I'd offer you my first attempt at my synopsis in Haiku form:


Containment failed,
The zombies spread, everywhere.
Can anyone survive?
Posted by Frank Tayell at 11:49

The Paperback - The Photo

My stack of books have arrived from the publishers. Before I wrap them and send them off as early Christmas presents to my friends and family who think that authors get free copies (we don't) and that therefore so should the authors nearest and dearest (well... I suppose that's fair enough, "tis the season" and all that), I thought I'd take a photo and share it. 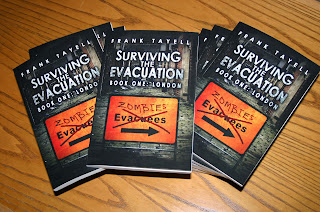 PBS & Zombies In The Classroom

PBS, working with Prof. Steven Schlozman, author of The Zombie Autopsies, have put together a series of zombie themed lesson plans for the teaching of neuroscience. My favourite is "The Neuroanatomy of Zombies." I wish we'd had lessons like this when I was at school.

This quote comes from the PBS website
"The content of the following lesson plans compares the “normal” brain to a “zombie” brain.  While zombies are not real, of course, there are plenty of diseases that affect the brain."

Of course, what we don't know is whether that is the broadcasters real motivation, or whether they know something we don't...

More details (and the lesson plans) here:
http://www.pbs.org/newshour/extra/2013/10/neuroscience-and-zombies/
Posted by Frank Tayell at 07:45

I'm just learning how to use these sites (what on earth does "Add it to the timeline on your wall" mean?") For that matter I'm still learning how to use this blog, which is why, currently, the buttons to like/rate the book don't appear on the column to the right where they should. This will come, but for now I'm putting all my energies into getting Book 2 out in December.

If you want to contact me, then please email: Frank.Tayell@gmail.com, or PM me on Goodreads or do whatever it is that you do on facebook (I really am that new to social media...). If you liked the book reviews on Amazon or Goodreads are always welcome.

Where To Run During The Zombie Apocalypse #1 Downe House

Where are you going to go when the dead walk? There are a lot of great places in the UK to head to, most of which didn't make it into the book because I didn't want Bill Wright to have an easy life (sorry Bill). I thought I'd share a few of them with you (they'd also make great places to visit if your in the area in the meantime, since it's always good to scout the locations of your possible post-zombie redoubts). First on the list (which is in no particular order, when you start seeing the undead on the news I'd really suggest you head to the nearest one) is Downe House in Kent. This was the home of Charles Darwin. It's a wonderfully rambling house lovingly maintained by English Heritage.

Points in its favour:
1. Its a museum, preserved to look as it would have done during Darwin's life. That means fire places, old utensils and pre-electric gadgets, as well as some of the weapons he took on his voyage for his personal protection.
2. The Library contains both popular fiction (of its day) and pretty much every scientific book of note. Everything you wanted to ever know about animals and plants all neatly gathered into one place.
3. The gardens are awesome. Seriously. They still grow food there. If you go for a visit you pay a pretty reasonable fee to get inside, but the real bonus is getting to buy the produce from the gardens. For a few pounds you can leave there with a marrow so large that it looks more like a prop from a film than something you'd see in a supermarket. (I'm thinking specifically of the Wallace and Grommit movie, but I assure you its real food). The gardens are extensive, well maintained with enough seed stock for even the most ambitious post-apocalyptic farmer.

So you have food, weapons and shelter in a house that doesn't require electricity. What are the cons?

It's in Kent. No, this isn't a dig at the Garden of England, it's just that Kent is one of the worst geographical locations in the country. Sandwiched between Europe and London there could well be millions of refugees coming at you from both directions. Depending on the specific nature of the Apocalypse you may wish to go elsewhere.

But in the meantime, particularly at this time of year, why not visit it and see for yourselves (and pick up some absurdly cheap fruit and veg at the same time.)