Zombies vs The Living Dead - Free for 48 hours! 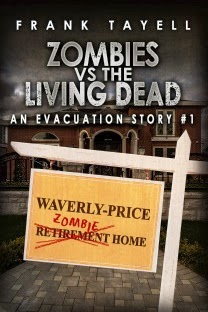 For George Tull and the other residents of the Waverly-Price Retirement Home, evacuation is not an option. Finding the staff have left, George has to choose between trying to save those he loathes, or abandoning the woman he loves to an uncertain fate.

"Zombies vs The Living Dead" is the first in a series of short zombie stories recording the aftermath of the outbreak, and is a companion piece to the series “Surviving The Evacuation”, Book 1: London is out now, and on sale until after the holidays. Book 2: Wasteland is due out in the next few weeks.
I hope you enjoy it.
Posted by Frank Tayell at 00:31