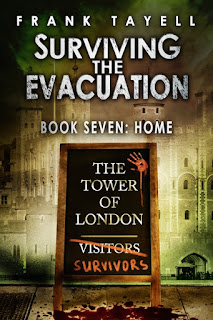 I’ve just had Book 7 back from the first round of proofreading (courtesy of http://insightcopyediting.com/ who proof a lot of  post-apocalyptic fiction, Bobby Adair, Philip Tomasso, Rachel Aukes and TW Piperbrook among others – if you’re looking for a book to read this weekend).

I’ve got to  dot the Jays, and check the doubles are properly crossed which should be done by Sunday, then it’s off for the final pre-publication proofing. In short, it should be out in the next ten days or so (perhaps sooner, we shall see.)

Book 7 is the last in the current series of Surviving The Evacuation, but that doesn’t mean there won’t be a new series set in this universe, and featuring some of the characters you’ve come to love and loathe.

Well, good news and bad news on that front. Bad news first. Yesterday I realised I would have to ditch all of my notes for the planned spin-off set in North America. The good news (and the reason why I abandoned the books I planned to write) is that I realised the story would work better if I started with Sholto, the outbreak, and his attempts to stop it. The sequel's to this book (probably called 'Zero') would then follow the trials and tribulations of those he knows, meets, rescues, and is pursued by during his escape from the US. I still plan for part of this story to be set in Canada, and for this to then tie in with Sholto's return to the US from the UK.

Because I’m starting afresh, it’ll be a while before I get another zombie book out. And it won’t be the next book I’m working. Why not? Well…

When I started this series, it was called “The Zombie War Crimes Trial”, was set twenty years after the outbreak, and was the setting for the trial of the architect of the Evacuation, and the outbreak. Obviously that didn’t happen. With each book published I thought the next would be set a couple of decades later, but, that didn’t happen either. After two years I have reconciled myself to the fact that if I want to tell this story it has to be as part of a new series. The World Turns, Book 1: Counterfeit & Book 2: Assassination will be written next, and I’ll have some more info (and a cover) to show you just as soon as I finish proofing Book 7, and that's something I should get back to.

In the meantime, I hope you're having a wonderful summer.
Frank.
Posted by Frank Tayell at 06:43