No matter what I planned for each book, the narrative has taken over, and changed the story completely. Book 2 was meant to be told from Jen’s point of view, Book 3 from Sholto’s. Book 5 was meant to be 60,000 words, and finish with the events that take place at the end of Book 6. I won’t even get into which characters were meant to die but didn’t, nor who did but died.

Book 1 wasn’t meant to be set during the outbreak, but twenty years after. The journal was discovered and presented as evidence during the trial of Jen Masterton, the last remaining representative of the government responsible for the outbreak. In that draft, the author of the journal had no name and no gender (although there was a barman named Sholto who’d come over to the UK just after the outbreak.)

When I wrote the epilogue for Book 7 it originally continued for another 5,000 words. But those words decide the fate of a lot of other characters. Has there been an election on Anglesey? Has Sholto gone back to the US? Have Bill, Kim, and the girls gone with him? Have they received a radio signal from there? I could make an arbitrary decision, but that would set the outcome in stone, and make any more books in the series difficult (and not much fun) to write.

As it stands (and this is the plan I came up with last night, so will probably be scrapped by the time you read this), there will be a prequel book ‘Zero’, beginning in New York, and recording Sholto’s escape from the US. This will be followed by a book (maybe titled ‘Escape’) that will tell the story of a woman he meets just before he leaves The States.

The story in the US will continue with the students who were recording the documentary inside the White House, and so were there to film the President’s last broadcast. (Probably a trilogy, and connected with the US side of the conspiracy.) Meanwhile, in the UK , I’ll tell the story of two American teenagers, in the UK on a school trip and stranded her during the outbreak (and it’s not exactly giving away the farm to say that they have a familial connection with some of the character’s mentioned above). This book/series will be called After The Evacuation and will co-star some of the characters from books 1-7.

Which is why I wanted Book 7 to end the way it did, I think it resolves the Nilda/Chester storyline, so if there are no more Evacuation books (for whatever reason), then there aren’t too many threads still left open.

But that’s a lot of writing. Probably another two year’s worth. Books 6 & 7 were written and published in four months. I don’t think I can keep up that pace without taking an occasional break. Instead, I’m going back to my original idea of what life would be like 20 years after the apocalypse. (It’s a high-tech thriller in a low tech-world.) On the other hand, I should have these books ready to be published late autumn, so then I’ll be ready to write some more... well, I won’t make any promises, because, as I’ve said, whatever I plan rarely comes to pass.

Instead, I'll say thank you for reading this far. I hope you've enjoyed the books to date, and I’ll offer you some original art from the new book. (I may use this for the cover. A final decision will be made when I’ve got the series name settled. The book is titled Counterfeit, and the series is titled “The more things change...” (But the series title changes about once a week. So far it’s also been called, World War Tea, The Coffee War, Smartphones and Steam Trains, and The World Turns.) 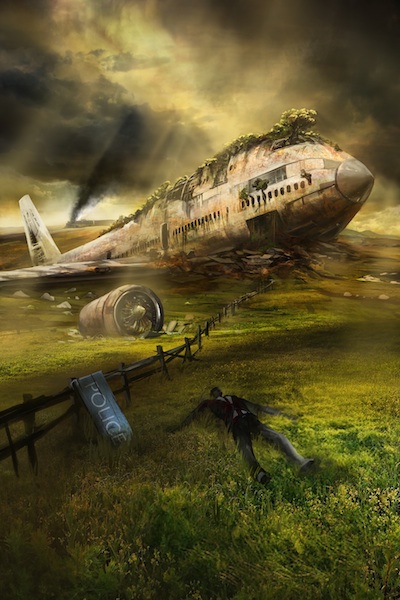 *unless I change my mind again this evening. Which, if past experience is anything to go by, I probably will.
Posted by Frank Tayell at 03:32