I finished my outline of Strike a Match 2 last week. The working title is 'The Luddite Conspiracy' though this might be too long for the cover. The outline came to 42,000 words. Going by the previous nine novels, this is about the right length.

I’m now re-writing it, paragraph by paragraph, making sure that the words match the idea for the story that I have in my head. This should take about 14-20 days, and by the end of it I’ll have a 70,000 word draft. That’s the point at which I go back through it, breaking up long sentences, removing redundancies, and making sure that the herrings are red, and the plot holes are filled in.

All being well, I should have it finished around Christmas. Because editors and proofers take time off over the holidays, it’s hard to say when it will be released. Probably January. Book 3 should follow soon after. I’ve got the outline worked out. I’ve just got a few more locations to find.

Audiobooks. More will be coming soon. I’ll be starting with Serious Crimes, and then Evacuation Books 4-7. If I’ve got my timings right, I will be proofing these four as I’m writing Surviving The Evacuation: Canada, Book 1: Break Out.

Zombies 2016. So, in 2016 I’m planning at least three more zombie books. Two set in Canada in the month after the outbreak, and then Zero, the story of Sholto and his attempts to save the world.

After that... There will be a few stand alone novels in the Strike a Match series, set during the time that Henry Mitchell spent wandering the wasteland, bringing law to the lawless. As for zombies, I have some ideas (Enough for five novels at the moment). I’m not sure whether to set these in the U.S. and in The Evacuation universe, or to set them in the U.K. as part of a new outbreak story. The decision will be based on sales/reviews, and it’s not one that can be made at the moment. Let’s see how the next five novels do first.

And in the meantime - coming very soon Apocalyptic Fears - a multi-author box-set of apocalyptic novels. 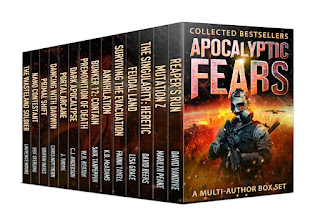 It contains Book 1: London, but there’s some great novels in there you may not have read. It’s a good mix of near-future dystopias, global zombie outbreaks, the apocalyptic breakdown of society, and everyday survival. Authors include Lisa Grace, David Van Dyke, Marilyn Peake and many others (and me!). This should be out by Christmas. More soon.