Counterfeit Conspiracy, the second novel in the post-apocalyptic detective series is out now in ebook. 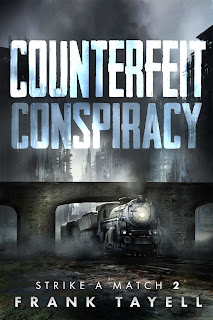 In 2019, the AIs went to war. Millions died before a nuclear holocaust brought an end to their reign of terror. Billions more succumbed to radiation poisoning, disease, and the chaotic violence of that apocalypse. Some survived. They rebuilt. Twenty years later, crime is on the rise. Detectives Mitchell and Deering must unmask the conspiracy threatening to destroy their fragile democracy.

Paperbacks are available to order from Amazon UK, Amazon.Com & your local bookshop

Counterfeit Currency, the sequel to Serious Crimes, has just gone to my trio of proofers for a final check, so the novel will be out in the next two weeks. If you enjoyed Book 1, and have a few moments to spare, I'd be really grateful if you'd consider leaving a review (and thanks to everyone who already has.) 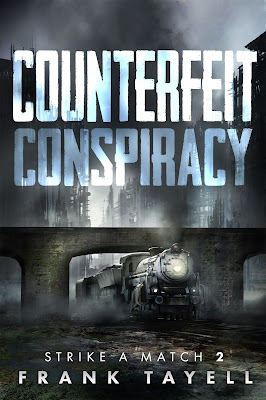 In 2019, the AIs went to war. Millions died before a nuclear holocaust brought an end to their brief reign of terror. Billions more succumbed to radiation poisoning, disease, and the chaotic violence of that apocalypse. Some survived. They rebuilt. Twenty years later, civilisation is a dim shadow of its former self. Crime is on the rise.

During the investigation of a routine homicide, Police Officer Ruth Deering prevents a group, claiming to be Luddites, from destroying the telegraph. This act of sabotage is only the beginning. As arrests are made and criminals are caught, evidence emerges that the saboteurs are connected to the AIs, the counterfeiting, and to the assassination. The shadowy figure behind the conspiracy must be unmasked before their fragile democracy is destroyed.

Originally, I'd planned for this story to be spread out over two novels, with part of the third novel set in the US (I think I've mentioned this), leading into a story about a post-apocalyptic Presidential election. I still plan on writing the account of that election, but there is a political element to the next Evacuation novel I'm writing (Zero, out this Spring), and that story takes place in America. I didn't want to write two novels with similar themes at the same time. For a similar reason, this is why this series begins twenty years after the apocalypse, rather than during The Blackout itself. (Though that's another story I do plan to write)

Having removed the US part of the plot (by moving the discovery of a crucial piece of evidence to the beginning of the novel), I could still have made this two books rather than one. It's quite a long novel, close to 90,000 words. It wouldn't have taken much to stretch it out, but I thought the pacing worked better as one novel than two. I hope you'll agree. Anyway, it's one book now, and as Maggie would say, I've made the decision, now I have to own it.

There will be a third (and perhaps more) books set in this universe, but the next will follow the social impact of crime on this struggling society. Being a series of interconnected vignettes, set in Leicester, Kent, Twynham, and elsewhere, it will focus on ordinary people, and their struggles to rebuild civilisation. Or that's the idea I have right now. If the past is any indication, the story will end up as something completely different.

And in the meantime, a reminder of summer (last summer, to be precise. Photos taken by me, of what in 2016 we call Southbourne, just south of Christchurch, but which in 2039 they call Twynham.) 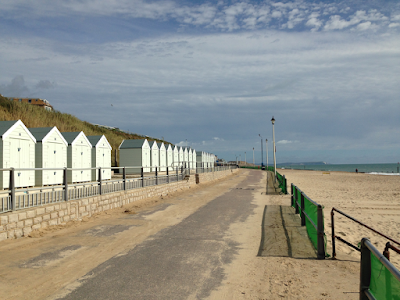 A photograph of the beach huts outside of which, in Serious Crimes, Henry Mitchell arrests Lucas Fairmont, the assistant to the American Ambassador. 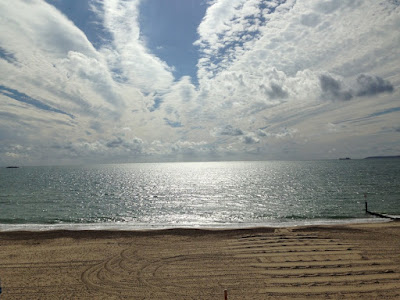 And the view out to sea that Detective Mitchell likes so much. Sadly, in my photograph, there are no rusting cargo carries or partially dismantled cruise ships. Well, you can't have everything.

I'm on the final, final (third time's the charm) rewrite of Counterfeit Conspiracy (Strike a Match 2), and have just reached the last chapter (it's called 'The Forest'.) I've a few minor details to change earlier in the book, but it should be off to the proofreaders later this week.

Originally, I planned for this story to be told over three books, but I've managed to find a way of wrapping it up in two. There will be a third book but it'll deal with the social impact of the crime wave (More on that, and why it's not a trilogy, when the book's finished.) One upshot is that, having wrapped up most of the story lines, I feel no qualms about leaving this universe and writing another zombie book. The next one on the slate will be Surviving The Evacuation: Zero, the story of Sholto, New York, and the missing <redacted for reasons of national security>

After that... well, I don't know what order I'll be writing these books in, but I've got a plan for a Book 8 & 9 (Sholto's return to the US. I've come up with an absolutely brilliant way of getting rid of zombies, so this story must be told). The big question is how many novels I need to write to cover the months between the outbreak and his return. I won't know that until I get cracking with his story.

As I said, there will be a Strike a Match 3 (and a 4, which is a Henry Mitchell prequel), as well as two sequels to Work Rest Repeat (I finally found a great plot for these after dozens and dozens of drafts). And then... well, by then we're probably well into 2017 if not beyond.

Audiobooks - Book 4: Unsafe Haven should go into production at the end of Jan, beginning of Feb. The rest will follow (budget allowing) soon after.

So, it's a busy year for me, and I should get back to it.

Hoping that you find this coming year is better than the last (what more can any of us ever hope for?),
Happy New Year,
Frank.