I've finished the drafts and begun working out whether I've chosen the best words to express the ideas in my head. Once I've done that, I've a few facts to triple check and... oh, yeah, the ending to write. I'd forgotten about that. Well, sort of forgotten. I had an explosive, nail-biting, chapter in mind. When I got around to writing it, I realised the events would end up killing every character involved, and since at least one of them crops up in books I've already written, that just wouldn't do.

All of which is long hand for saying the book isn't finished yet, but it will be soon. (yay!) That brings us to the cover below. It will probably (almost certainly) change. Not by much, I'm planning on removing the line 'The Prequel'.

There's no way of writing Sholto's story without including all the things he knows. Bill & Kim don't find these out until Book 2 & 3. If I market this as a prequel, it'll spoil those twists. As such, my current plan is to market this as "Zero (Surviving the Evacuation USA 1)". This'll make no difference to the story. One day, I'm going to write a book where I pick a title and stick with it. One day.

This book will be followed by another novel set in the US, beginning in Washington, and filling in the parts of the conspiracy that Sholto couldn't expose. Yup, another conspiracy. This is the story of a rigged election, an honest President, and a plot to steal the White House. Oh, and zombies. There's a lot of those as well. 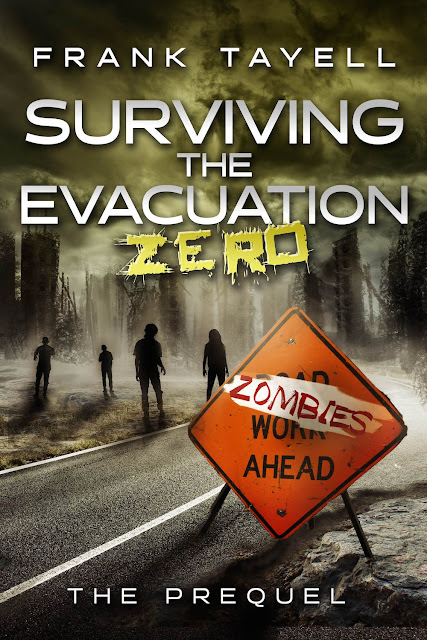 In other news: The audiobooks have been delayed again. I'm hoping to get them out in April. The only consolation I can offer is that I'm planning on getting this title recorded as soon as it's published. Apologies.
Posted by Frank Tayell at 03:40