Surviving The Evacuation: Here We Stand - Out Now

Would you try to save the world?

There is an evil cabal at the heart of government. For years it has bribed, blackmailed, and murdered in pursuit of global domination. In an attempt to destroy it, Tom Clemens rigged the presidential election. His candidate won, but the conspiracy wasn’t stopped. Framed for murder, Tom is on the run. Searching for evidence of the cabal’s plans, he is in Manhattan when the impossible happens. People attack one another. The victims die. They come back. Zombies.

Uncertain who created the outbreak, but knowing it’s connected to the conspiracy, Tom flees New York. As law and order breaks down, the undead spread throughout America. Tom searches for the scientist who might be able to stop the outbreak, unaware that the conspirators are searching for him.

From Surviving the Evacuation, this is the story of Sholto, the beginning of the outbreak, and the people who tried to stop it.

Please note: As the President of the United States is a background character, and the presidential election a background event, American English has been used in this book though with some British spellings in deference to the fact that most of Surviving the Evacuation takes place in the United Kingdom.

Paperbacks - These should be available today (for next day delivery) from Amazon and will be priced $9.99/£6.99 (or local equivalent). Please ignore any second-party sellers offering them for £69.99 and above - these are scammers who don't actually have copies of the books. 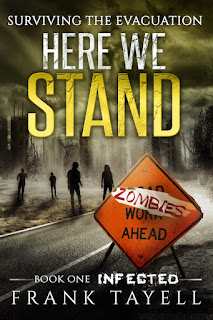 I hope you enjoy reading it. :)