Surviving the Evacuation has some new covers (Part 1)

As part of a rebrand, I've had some new covers designed: 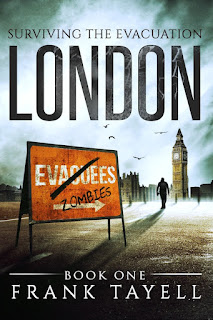 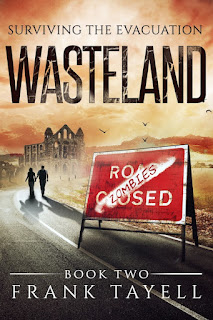 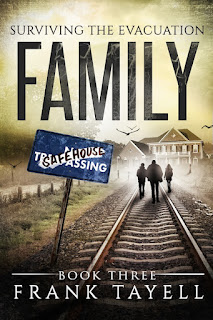 I think they're great. (These have been designed by http://yocladesigns.com I'd thoroughly recommend this company).  I'll be uploading these to the various sites over the next few hours. Books 4-7 will also get a rebranding, but... um... I'm trying to work out how to explain this without revealing any spoilers. Okay, here goes. Book 8 will be a first person journal written for the survivors of a small community in... oh, well, since the book is called Anglesey I guess there's no point being coy about where the story is set. Because it's written as a journal, some events wouldn't be written down. These events are critical to the final final novel in this phase of the series, so I'll need a story told in the third person to include the discussion of these events. I'm not sure which characters will be in this story, but it will have an impact on whether Books 4-7 should have a slightly different cover to Books 1-3 & 8.
Is that too vague? Probably. I've got to write out a few different outlines before I make a final decision, but should have it all finished around the time Here We Stand Divided is released.

SPOILER WARNING - the third paragraph from the end contains a spoiler if you've not read up to Book 4: Unsafe Haven.

I'm a novelist. Give me 70,000 words and twelve weeks, and I can do nuance. With a two-line reply to a message, I fail, utterly. As such, I like to add a smiley face when I reply thanking you for your kind words. Back in January, I decided to give Facebook advertising another try. I've experimented with these ads in the past, but didn't have much luck. This time around, the ads have worked, and I'm getting a lot of positive feedback from people who have liked the series. The result of this? I'm typing :) an awful lot. And the result of that? I've noticed something really weird.

Each time I type : ) I smile. It's a genuine, lip-curling, eye-crinkling, heart warming grin, not the wide-mouthed, teeth bared grimace I use when someone points a camera in my face. What I'm puzzling over now is whether I type : ) because I'm smiling, or I smile because I've just typed : )

Which comes first? How can I solve this mystery? My first thought was electrodes stuck to my brain, recording brainwave activity. Of course, a base line for a smile / happiness would need to be established, and that could be difficult. My second thought was a camera on the computer with some software that linked it to a keyboard-log. So, on signing out of Facebook, I could replay the footage, find the moment I smiled, then check the keyboard-log, and see if the smile came before I typed a colon, or after.

My third thought was that my time would be better spent writing the next book.

Here We Stand 2 is heading towards finished. I've a few things I want to change in this draft. I had a character in mind for this book, a woman Army medic who suffers from post-traumatic stress. I wrote her out of it in this draft because I thought she might be too similar to Tuck. That's just daft. She's a very interesting person, and because the third book in this series (which covers the events in the US concurrent to Books 1-3) can't feature Sholto, I need some interesting people in it. So I need to change that, then beef up the ending - I think it needs more depth, and my retired-detective character needs a few more lines. Otherwise, it's mostly there, and I should be finished by the end of the month.

SPOILER - if you've not read up to Book 4, please stop reading.

Next up will be Book 8: Anglesey. I know it was going to be the Midlands story, but I started making some notes for Book 8 and found it remarkably easy (and fun) to write. In part this is because (if you remember from Book 4) Annette has copied Bill's journal and distributed it around the island. And, because Book 8 is written in the first person, Bill gets to write it for the survivors on Anglesey. Or, to put it another way, I get to imagine these survivors are you, and so you're the people for whom Bill is writing. (Not that Bill was ever me, I hasten to add.) This makes this story wonderfully meta, and delightfully fun (but still occasionally very grim).

Of course, a couple of weeks ago, I said something similar about the Midlands story, so I might change my mind and go back to writing that. Either way, about 12 weeks after Divided comes out, there'll be another, utterly British zombie book. More on that when I've made the final decision as to which it'll be. Strike a Match 3 will follow this autumn, set partly in Leicester and Kent, I'd like to use this story as a comparison with Surviving The Evacuation, comparing how the places look after two very different apocalypses.

But one book at a time, and right now, it's a splendid day here in south London. I'm moving my chair outside, so I can write in the sunshine.