Here We Stand 2: Divided Out Now

Surviving the Evacuation continues in Here We Stand 2: Divided, out now. 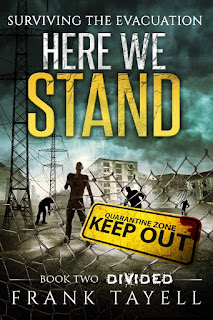 
It is a week since the outbreak began in New York. The president has been betrayed. The vice-president is dead. The government has collapsed. The conspirators are close to victory.

Having narrowly escaped agents of the cabal, Tom Clemens heads to Washington hoping to get word of the conspiracy to the president. The highways become impassable, filled with millions fleeing from the cities. Towns are fortified, but it is too late. The infection has already spread throughout the country. Nowhere is safe from the undead.

As refugees storm the towns, and zombies fill the smoking ruins, survivors become more deadly a threat than the impossibly living dead. Still hopeful he can find the cause of the outbreak, and so end it, Tom fights his way through an undead America. As he searches for the cabal, he is unaware that they are searching for him.

The story will continue in Surviving the Evacuation Book 8: Anglesey (out soon).

Before the books were Here We Stand, I'd planned them as a prequel (and as one book). As I wrote the story, the plans changed though a lot of the minor characters, events, timings, and locations had to stay the same so as to match what had been described in Books 1-3. I think the end result is pretty cool, and hope you'll find it an enjoyable read, but those changes have had a knock on effect for the rest of the series. There will be a few more Surviving the Evacuation books, and Book 8: Anglesey will be out soon, but I may have to change the plot and places for books after that. (This will all make more sense after you've read Here We Stand 2 & Book 8). The upshot is that the Midlands stories may now become a separate series about a new outbreak. I've got a plot for this, but one series at a time.

---
Surviving the Evacuation Book 5: Reunion is currently being recorded as an audiobook and should be out in July. I've worked out the motive, the method, the victims and villains for Strike a Match 3: Economic Necessity (the title may change), and hope to get that released soon.
---

I hope you enjoy this second part of Sholto's escape through an undead America. Have a great weekend.
Happy reading,
:)
Posted by Frank Tayell at 02:55