Serious Crimes is currently free on Amazon, Google, Kobo and iTunes (and all other retailers). The first book in the Strike a Match series, this is a post-apocalyptic detective story of life twenty years after a nuclear war.
Amazon UK - Amazon. com - Kobo - iTunes - Google 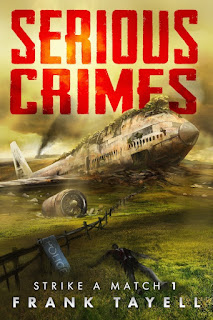 Two decades after the artificial intelligences fought their brief, terrible war, the southern coast of England has become the hub of civilisation, though Britain has been reduced to a population of two million, and technology has regressed to the age of steam. Europe and Africa are wastelands with only a few coastal communities holding out against barbarous savagery. The United States is divided. Three presidents claim the title, but there are too few survivors for the the country to be riven by civil war. Instead, diplomacy prevails. As Americans gear up for re-unification and a presidential campaign, Britain is looking forward to its own election and the question of whether the ageing prime minister will step down.
As the democracies struggle against the nightmare forces that would turn them into dystopias, old conspirators emerge. Power is once again a prize worth murdering for, and it is down to the understaffed Serious Crimes Unit to stop them.
This isn’t the story of how individuals survive the immediate horror of nuclear war, but of what happens next, of how they rebuild, and of those who would try to stop them.
When I first came up with the idea for Surviving the Evacuation, it was called The Zombie War Crimes Trial, and that title pretty much describes the plot. The journal was presented in evidence twenty years after the outbreak at a trial of the politician the survivors held responsible. Back then, the story was set on the Isle of Wight, but as the journal got longer, the plot changed. I’d always wanted to write a story about what happens next. Books about the apocalypse (and movies, for that matter) always stop when the hero wins (or dies) and the world is saved (or destroyed), but that always made me wonder, what next? Did Bill Mason ever find a way of stopping the triffids? Without the evil corporation, did democracy prevail? How did they distribute the food? How did they create an economy? Where does the electricity come from?
I wanted to know the answers. After writing Book 7: Home, it became clear that Surviving the Evacuation was never going to reach twenty years after the outbreak, so I created Strike a Match instead. There are no zombies, but it’s the thematic successor to The Evacuation (you might spot a few similar(isn) characters.)
Book 1 of the series is free at the moment (at least until the weekend, though it’ll be going back to £1.99 soon). Strike A Match 3: Economic Necessity will be out this autumn followed by one or two books a year up until 2020.
If you’ve already read it, I hope you enjoyed it, and if you haven’t grab a copy now.

I hate spoilers, but have a tendency to assume that everyone who reads this has read everything I've published. It's a daft assumption, and one I must rid myself of, so I'm going to try to give an update without any spoilers. Here goes:

1. Book 5: Reunion is back from the producers, and has been sent to Audible(Amazon). It should be available in the next two weeks. (The last audiobook took about ten days.)

2. I'm not sure whether Strike A Match 3 or Surviving the Evacuation Book 8 will be out next. When I get stuck on one, I switch to the other. Both will be out before the end of the year.

3. Strike A Match 3: Economic Necessity follows a number of cases, the first of which is called 'The Food-Bank Job'. The story takes place in Twynham, Leicestershire/Northamptonshire & Kent. I'd love to tell you more, but I best not, (this was a much longer paragraph, but on re-reading I realised it gave away the plot twist.)

4. Book 8: Anglesey will take place on the island, in Caernarfon, and Bangor, between August 15th and September 20th, the year of the outbreak. It will reference Lisa Kempton and General Carpenter from Here We Stand and... and I'm trying to work out how to say this circumspectly... a character that appeared first in Book 4.

Where Books 1-7 focus on whether individuals can survive, Books 8-10 focus on whether civilisation itself can be preserved. Of course, not all of it can, and what it becomes will look very different to what we know now, so the question is whether it is better, worse, or both. In addition to the systematic looting of undead-towns and cities, individual struggles for survival against both human and undead foes, these books will also contain descriptions of finger painting. You have been warned.

5. It will be followed by Book 9: Belfast (which may be changed to Book 9: Ireland, depending on how much takes place in the city, and how much the surrounding countryside, and whether the narrative crosses the border). Book 9 will take place in October.

6. Book 10 will begin in Anglesey, a few days before the date on which Book 7 ends, and carry on to Christmas, and perhaps beyond.

8. I'll probably write Here We Stand 3: Betrayed before Book 10, perhaps before Book 9. Can I tell you why? Um... I'm not sure. Here We Stand 1 & 2 introduce all the heroes and villains for the series, and it's one of those with whom Book 3 was going to begin. I realised a week ago that it's much better to skip that story, and just continue from the end of Book 2: Divided, with those people who appear a the end of the book. And I really can't say any more without spoiling too much.

9. I've plans for a lot more novels in Surviving the Evacuation, Here We Stand, and Strike a Match, but this should keep us going for a year.

10. The best thing about starting work at dawn is that, by this time of day, I've done about five hours of work, which means I don't feel bad about going to the park and having a morning ice-cream. On the whole, I think I prefer it to a morning coffee. (It's the little things...)

I'll keep writing away, and in a couple of weeks, it should be clear which book will be published next, and when it'll be out. Perhaps, by then, I might be able to give you some more concrete details.