Surviving The Evacuation 8: Anglesey - Out Now 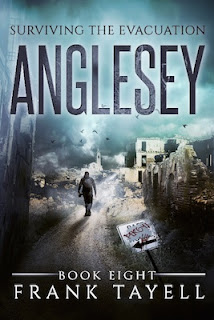 Paperbacks (should be available to order from Amazon on Wednesday, and from your local bookshop on Friday)

(It will also be available on Barnes & Noble, Scribd, Smashwords & Tolino)
---

Eight months after the outbreak, Bill Wright is trapped during a survey mission of Ireland. Surrounded by the undead, low on food and lower on water, he’s been in this situation before. Unlike before, help is only a rifle shot away. While waiting for the rescue he’s sure will come, he records the turbulent events since his last entry.

The Welsh island of Anglesey has become a sanctuary for survivors from across the zombie-infested world. It has electricity, wheat, and not much else. Medicines and equipment, plants and fertiliser, books and batteries, and so much more are needed if this last bastion of civilisation is to survive. Scavenging expeditions depart for Svalbard, Liverpool, and the southern Atlantic, but a discovery is made far nearer, one which will change the fate of all those who’ve come to call Anglesey home.

Set on Anglesey, in Bangor and Caernarfon, and in the Republic of Ireland, Bill’s journals continue, as do the adventures of Kim, Annette, Sholto, George, Mary, and a few other familiar characters (not all of whom are to be trusted...)
I'd recommended that you read the spin-off stories, Here We Stand 1: Infected & 2: Divided, before this novel.

The series will continue in Book 9: Belfast, out this winter 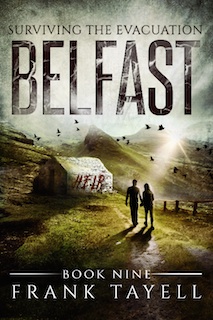 Surviving the Evacuation, 8: Anglesey - Out Next Week

After a lot of rewriting, Surviving the Evacuation Book 8 is finally (almost) about to be published. It's due back from the final proofing tomorrow.  I've a few changes to make to the ending, but it'll be out next week. If you want to make sure you're among the first to know when it's out, you can join the mailing list here: http://eepurl.com/brl1A1 (I'll also post here as soon as it's out)

Set on Anglesey, and in Bangor and Caernarfon, and in the Republic of Ireland, this is another journal, picking up, more or less where Book 3 finished. It continues the story of Bill Wright, Kim, George and Mary, and a few other characters you may remember. Though this is a self-contained story, the survivors account will continue in Book 9: Belfast, due out this winter.

I've worked out a rather fun ending to the series, though I'm not sure whether this will be in Book 11 or later. Before we get there, there's a return to the United States in Here We Stand 3, due out next year.

Speaking of which, I would strongly recommend you read Here We Stand 1: Infected & 2: Divided before Book 8: Anglesey. It will provide a bit of background to the heroes and long-dead villains, and to a few locations important to the story.

I say that Book 8 more or less continues from the end of Book 3, the more in that statement is because the account begins in late September, when Bill... you know what, rather than trying to explain, I can just include the first few paragraphs here:

Trapped. There’s no other word to describe it.
I’m trapped in a small room with zombies beating against the walls outside. I have a litre of water, a handful of high-calorie ration bars that only the most desperate of submariners would call food, and I’m alone. Unlike when I was trapped in my flat in London, I’m not worried.
Just over a month ago, when I wrote my last entry, I really did intend it to be the end of my journals and a conclusion to that part of my life. I’d thought we’d found a refuge on Anglesey, a place where we could be safe. I wasn’t completely wrong, but that’s another way of saying I wasn’t entirely correct. I promised Annette that I’d write an account of the last tumultuous month and, as she insists on describing it, how she saved civilisation. As I currently have pen, paper, and little else to do until Kim rescues me, I might as well record it now, and there’s no better place to start than with where I am.
I’m a mile south of Kenmare Bay in County Kerry on the southwestern coast of the Republic of Ireland. More specifically, I’m in the garage of a walled, fifty-acre farm called Elysium. At least, that’s the name that’s carved into the plaque by the main gate. According to the address at the top of an unpaid parking ticket I found in the desk drawer, it’s called Ifreann. My Irish Gaelic is almost non-existent. The little I know comes from a dismal childhood holiday at Caulfield Hall, the Masterton’s family estate. It rained nonstop, and I was beyond bored as Jen spent most of that summer visiting family friends in Monaco. I found little with which to entertain myself other than a few books on Celtic legends. They were in English, but with a few words of Gaelic peppered in. At the back was a vocabulary list. Ifreann was used often, and I always understood it to mean Hell, not some Elysian paradise.
The garage is large enough for four partially dismantled cars parked abreast though there’s only three in there right now. I am in the stiflingly hot office at the side. It’s about twelve feet by ten, with a door to the outside, a door to the garage, and a hatch leading to the roof. I’ve barricaded the exterior door with a filing cabinet. If I listen carefully, I can hear the zombies that chased me in here. They’re pawing and clawing at the door, but it’s sturdy and secure. I’m safe. The reason I need to listen carefully is that two dozen more are beating and hammering at the metal shutters that cover the entire north face of the garage. Inside, there’s a set of sliding, transparent doors that can be opened so the cars can be driven out. With the shutters down, there’s no light in the garage, and no light in this office except that which comes from the hatch immediately above my head.
Beyond the zombies immediately outside, there are forty or so gathered in the driveway near the fountain. There are at least that many, and probably more, near the tennis courts and pushing their way through the trees that screen the fifty-acres of farmland from view. North of the garage is a three-storey mansion. I didn’t get too good a view of the building before the zombies appeared through that screen of trees. It’s a mystery where they came from. They. It is they, not They. I’ve only just noticed that I’ve been writing it in the lower case.
Kim said that my use of the capitalisation was a way of disassociating myself from the impossible horror surrounding us. I won’t lie and say I don’t fear them, particularly when I can hear their desiccated fingers dragging down the brickwork outside. It’s simply that they are no longer my greatest fear. The nuclear power plant on Anglesey could melt down. The water treatment plant could break. The old world food stores may run out before we have productive farmland. And, of course, there’re the threats that only come with people. I don’t mean disease, though it is an increasingly present danger. I mean violence and murder, and the fear and disunity those bring. That is why the undead are they not They, not anymore. Whatever I call them, and whatever my fears for the future, right now the zombies are my most immediate problem.

Book 8: Anglesey - Out Soon in ebook and paperback. :)