Hello, I hope you're well. Apologies that I don't have the news you were hoping for. Book 9 isn't ready yet (it'll be out around the end of December or beginning of January). 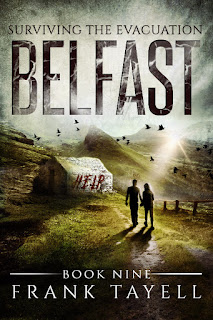 It's getting there, but I keep finding I need to make major changes to the plot. The biggest of these... well, I won't tell you what I was going to do as I may use that for a later book. What I will say is that this story is almost entirely set on the island of Ireland. Actually, strictly speaking, that's not true. It's almost entirely set on the island of Ireland, or around the southwestern coastline. I originally thought that by giving our heroes access to a small ship, they'd be able to travel quickly and easily to Belfast. Turns out that fate (or my imagination) had other plans. It would have been far safer had they walked.

If I had to pick a date for the release I'd say around the 25th December, and that might prove a problem. Some of the retailers close their sites to new books over the Christmas period, and, of course, my proofreaders can't be expected to work over the holidays. This adds a bit of uncertainty to the release date.

Audiobooks - Book 7 is being recorded at the moment, and should be out before Christmas. (I'm hoping for early December). After Book 7, I think the next set of audiobooks will be for Strike a Match - I'll be making a decision about this in the next week or two.

Speaking of Strike a Match, I've been working away at the third book in the series over the last six months. It's gone through a lot of rewrites (and hundreds of different crimes.) I think I've cracked it, and will be focusing on this after Book 9, with the intention of getting it out early in 2017 in print, ebook and audio.

The future... I swing back and forth on whether I'm ending Surviving the Evacuation or not. I've got an ending, you see, and it's now baked into this story. At some point, I'm going to reach it and... well, that'll be it. It'll be the end. The good news is that this ending isn't in Book 9. Nor will it be in Books 10 & 11. These two books will be told in the third person, though I've not decided which person this is. I will say that these two combine the London and Anglesey characters. Most of the story doesn't take place in either location. (Birmingham is one option, though so is Blackpool, or Leeds).

I've also got to return to the U.S. for Here We Stand 3. While this primarily features Jonas, Martha, & Kaitlin, it also features one other character mentioned in the first two books. My initial plan was that this should be Nate, the student filming the documentary in the White House. As his adventure begins in Washington, this would be a great way of maintaining the political storyline without being too political. I'm having second thoughts about this. In the first Here We Stand book, there's a detective whom Sholto meets during his escape from Manhattan. This detective only features for a brief paragraph, but I can't help wonder what happened to him. 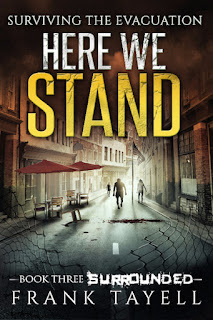 But Book 9 must be finished first, and so I should get back to it.

All the best, and thanks for your patience, Frank. :)
Posted by Frank Tayell at 04:13