Surviving The Evacuation 10: The Last Candidate - Out Now

Whoever wins the election, humanity will lose. 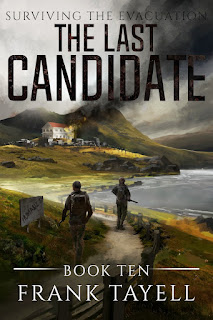 Nine months after the outbreak, ten thousand survivors from across the globe have found a refuge on the Welsh island of Anglesey. Hordes of the undead ravage the wastelands of Britain and Ireland. Satellite images show that the rest of the world is no better. Food, fuel, and ammunition are running low and there are no more old-world supplies with which to replace them.

Intended as an alternative to a slide into despotism, an election is called. It is hoped the contest will bring forth solutions to the myriad crises facing this last bastion of humanity. After the favoured candidate is hospitalised, suspicion falls on the new frontrunner, a publican who purchased his support with an impossible promise of a return to the pre-apocalyptic world. With no viable candidate, and no way of calling off the election, those who still have access to a ship plan their departure; others plan to rig the contest; a few give up on all plans for a future beyond tomorrow. Anglesey is on the verge of collapse, and humanity is on the brink of extinction.

Set in Belfast, the Isle of Man, and Wales during the run-up to the election on Anglesey, this is the sixth volume of Bill Wright’s journals.

The book should be available on Nook & Google Play in the next few days.

Paperbacks should be available on Friday from Amazon, Barnes & Noble, The Book Depository, and to order from any independent bookshop.

Audiobooks: Here We Stand 1 & 2 should be out in the next week or so on Audible, iTunes, and Amazon. Production will begin on Surviving the Evacuation Book 8 on 16th May (with Books 9 & 10 following later this summer). Strike a Match 1, 2 & 3 will be recorded in August (assuming I finish Book 3 by then :) )

Coming soon: Um... well... I'm not sure. My original plan for this series had the election taking place in Book 12, bringing it forward works rather well (in my opinion) but it does bring forward a story that I wasn't planning to write quite so soon (this will make more sense when you get to the end of Book 10). I'm going to sit down today with a blank sheet of paper and a very large mug of tea (naturally) and see whether there are any subplots that can be merged together or discarded. Either way, and wherever the next book takes us, expect it out in about three months time.

nz;dr: Surviving the Evacuation: Book 10 should be out in April, as should the audiobooks for Here We Stand 1&2

Surviving the Evacuation, Book 10 is nearing completion. Called 'The Last Candidate' (unless this title is too large for iTunes), the story is set in Belfast, the Isle of Man, and North Wales during the run up to the election on Anglesey.

Originally, Book 10 was meant to return the narrative to Nilda et al in London, but as I was writing Book 9 I saw an opportunity to write a political thriller, but with zombies! It was too good a chance to pass up.

This first election on Anglesey was meant to be a pro-forma event, a somewhat comical battle between Bill and Sholto, told as a light-hearted fireside conversation to Chester & Nilda. As this conversation developed into a novel, it took a turn for the dark (and the better). The problem I found, as I often do, is that though Bill and Sholto each have their own plans, there are other forces at play. Some good (Dr Umbert & Lorraine), some bad (Markus & Bishop) and some intent on doing the best for her crew regardless of the cost (the admiral).

Unfortunately, I missed my slot with my usual cover designer (I hadn't planned to write Book 10 immediately after Book 9) so I'm getting Jeff Brown to draw a scene - He's the artist who drew the covers for the Strike a Match books. This should be ready later this week.

I'm tidying the book up at the moment, and I'm about halfway through (they've just arrived at the Isle of Man), so all being well, it should be out this month. Also unfortunately, I've been unable to include the Tower of Refuge into the story. I desperately wanted to because it's one of the coolest places I've discovered while writing this series: https://en.wikipedia.org/wiki/St_Mary%27s_Isle#The_Tower_of_Refuge
Built in 1832, it's a small castle built onto a reef, there as a refuge for any sailors whose ships founder. Perhaps it'll make it into a different book.

Audiobooks - Here We Stand 1 & 2 are being recorded at the moment, and should both be ready this April.