Serious Crimes (Strike a Match 1) is out now as an audiobook. 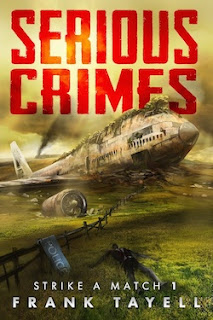 In 2019, the AIs went to war. Three days later, the EMP from hundreds of nuclear bombs destroyed the infected circuits. Billions of people succumbed to radiation, starvation, and disease. But millions survived, and they rebuilt.

Twenty years later, a ceremony is being held to mark the first transatlantic broadcast since the Blackout. The Prime Minister of Britain and two of the Presidents of the United States will speak to an audience of nearly 10 million people. Not all are celebrating. Crime is on the rise, and power is once again a prize worth murdering for.

Ruth Deering, a new graduate from the police academy, doesn't care about ancient history or current affairs. She only joined the force to escape the smog-infested city. Those hopes are dashed when she is assigned to the Serious Crimes Unit, commanded by the disgraced Sergeant Mitchell. Her first case appears to be a simple murder, but the investigation uncovers a counterfeiting ring and a conspiracy that threatens to destroy their fragile democracy.