Surviving the Evacuation 13 - Out Soon.


Surviving the Evacuation 13: Future’s Beginning will be out very soon, set in Dundalk and Belfast over three days that change everything. 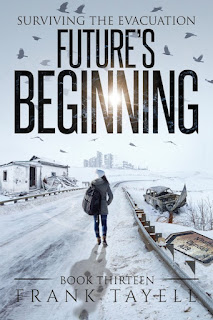 (Audio - I’ve locked Tim Bruce in his studio, and he’s recording Book 12, and nearing the final few chapters. I expect it back this coming week.)

Book 13 is with the proofers at the mo. I’m using a new team with this book, and while they haven’t given me an exact delivery date, they’ve said it will be before next Sunday.

Please note, Sholto is one of the big stars of Book 13, and he makes a few references to his escape from the U.S. in Here We Stand 1&2 (particularly the end of Here We Stand 1). If you’ve not read it yet, this would be the perfect time.

Sorry for the lack of updates, but things have been a tad hectic on my end (and will remain so for the foreseeable, though I’m still aiming to publish another three books this year). While life(TM) is partly to blame for the delay in publishing this book, most of the fault lies with me.

I’d thought Book 13 would focus on Bill & Chester (as their story begins about halfway through Book 12). I wrote a good chunk of their adventures before I realised their story doesn’t really make sense unless, first, we return to Nilda & Jay, and their... actually, best not say what they’re doing or where they are. Anyhoo, I then wrote a good portion of Nilda’s exploits, too, before I realised that, of course, and with the sat-phones, they’ll spend some time discussing what’s transpired in Belfast and Dundalk following the sabotage. Thus that, (and, in hindsight, obviously) is where the story must begin. The end result is that Book 13 is now set in Belfast and Dundalk. Mort Vivant (Bill & Chester’s story) will be told in Book 14.

In order to maintain consistency with the broader timeline, changing the story around in this way required a major restructuring of the plot. There’s more about Siobhan than Colm, and Bran than Mirabelle, than I’d originally planned, but the outcome is a tight-packed, twist-filled, zombie-procedural, horror-thriller, focusing more on people than the undead. It’s a little different from the rest of the series, but sets up a return to a survival-based story in Book 14. Beyond that, well, things are getting increasingly desperate for our heroes. Will they survive until Book 15? I hope so, I’ve just ordered the cover.

One (exciting to me) upshot of this change was that I was able to use a Markus-subplot. If you remember, Book 9 was originally mostly set in Belfast. When it became clear that book would have to be set more widely across Ireland, I had to put that plot back on the shelf but, woohoo! I’ve been able to include it here. (Albeit in a trimmed down fashion. You’ll know which scene I mean when you read it.) Now, can I tell you anything else about the story? Oh, of course, Annette's searching for a stray cat. Hmm... I can't think of anything else without revealing too much.

The cover for Book 13 has been designed by the team at Author Packages.

If you’re looking for graphics/covers, I can’t recommend them highly enough. There was a mini-nightmare with the original cover. I contacted Author Packages on Monday, had a sketch back on Tuesday, some options on backgrounds/foregrounds on Wednesday, a draft on Thursday with the changes all made by Friday. They’re competitively priced, friendly, very professional, and I’ve already ordered the next cover from them.

Coming next, Book 14: Mort Vivant. This will be followed by a novel (maybe a novella) following the exploits of an FBI agent before and after the outbreak, and which sets up the events in Book 15.

Coming soon (though not as soon as either of us would like): Outback Outbreak & The Great Undead North. (Possibly with a story in between. The Great Pacific Zombie Patch, perhaps? Perhaps not, or at least not that title...)

Have a great weekend and week. May it remain safe from the living dead.
Frank :)