Surviving the Evacuation: No More News Out Now

Surviving the Evacuation: No More News
(Life Goes On, Book 2) 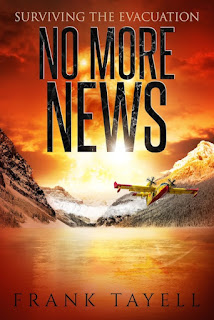 When Pete Guinn travelled to Australia to find his missing sister, he left behind the woman he loved. In the city he once called home, panic and chaos arrive long before the living dead. As South Bend burns to the ground, Olivia flees, seeking safety in the remote woods of Michigan. But the backwoods are no safer than the outback, and nowhere is remote enough to escape the horrors of the living dead.

With global communications systems fractured, Pete Guinn and his sister, Corrie, are a small part of a large effort to re-establish contact between the forces still fighting the undead. As they journey east across Canada, they instead find the frontline. An army is being formed out of Canadians and refugees from the United States, out of retirees, reservists, and conscripts. Night and day, a war is waged against an enemy that doesn’t tire or retreat, ask for quarter or offer it. But victory is in sight. The undead can be defeated. As long as the supply lines are maintained. As long as the ultimate sacrifice is selflessly made again and again. As long as the worst of the apocalypse is behind them. But though the apocalypse has begun, the reckoning is still to come.

Set in Canada and the U.S. Midwest, continuing the story of the survivors in the Pacific, which began in Outback Outbreak, No More News is a story of love and war as the apocalypse tears our world apart.

Available in ebook and paperback from:

It should be available from this evening/Monday on iTunes, Google Play, Barnes & Noble, Bibliotheca, Scribd and Playster.


--
Life Goes On
No More News continues the story which began in Outback Outbreak. To reduce confusion, I thought it best to give a separate series-title to the story of the survivors in the Pacific. I considered calling it The Zombie War Crimes Trial, being the working title for Surviving the Evacuation before I published Book 1. But most of the original plot points of the trial have already appeared in Books 1-16. I then considered Rules for Surviving the Apocalypse, but though No More News is more lighthearted than some of the books in the series (albeit set in the shadow of Prometheus), that title would be far too glib for the story that's coming next. I opted for Life Goes On instead, which was originally the working title of the Strike a Match series, but which fits these characters' struggle rather aptly.
This book does continue on from Outback Outbreak, and so you should read that first, but these stories, though connected to the survivors in the Atlantic, can be read as a separate adventure.

Surviving the Evacuation: After The Tsunami (formerly No More Rules), a tale of power and politics in the bunkers beneath Canberra.
Book 18: Sinking City
A World of Magic - a contemporary comic fantasy of dragons, lockdowns, broomsticks and physical distancing.

PS, Usually, on finishing a book, I take my flask of tea for a long walk. In these days of non-zombie lockdowns, walks have been replaced with an exercise bike. At the speed I peddle, a ride is pretty much the same as a walk. I've not tried drinking tea while riding it. But as they say, there's a time for everything. Stay safe. :)
Posted by Frank Tayell at 09:59