Out now in Audio: While the Lights Are On

Out now in audio, While the Lights Are On

And it should be up on Amazon and iTunes in a day or two. 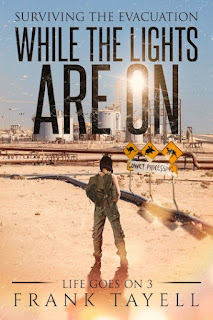 Save Australia, Save the World.

I’m very, very sorry for the delay. Audible reported having been inundated with lots of new books which slowed their quality-control process. Turns out someone really does listen to all the audiobooks before they're released.

13,000 people have survived the undead, the nuclear war, the famine, drought, perilous oceans and apocalyptic warlords. That was the easy part. For the species to avoid extinction, a new society must be formed, resources found, technologies preserved. Civilisation can’t be rebuilt in a day. It will take generations, but each hour’s delay represents a further step into a new Dark Age.

A journal, set in Canada (and elsewhere) featuring people, places, and events from Life Goes On.

Coming in 2021 - Life Goes On 4 & Book 19 - The story of Lisa Kempton, Team Stonefish, the end of the cartel, and the beginning of a new era. (It’s possible this story might require more than two books. We’ll see how they go.)

A World of Magic (a post-pandemic comic fantasy.): I’ve almost finished the first book, but still need to work out whether it’s a two-parter or a trilogy. To avoid huge delays between releases, I’d like to get the drafts well underway before release.

And in November 2021 - Strike a Match 4: Over by Christmas (because I finally cracked an ace way of telling the story, Woohoo!)