Out Now: Surviving the Evacuation 18: Rebuilt in a Day

Surviving the Evacuation, Book 18: Rebuilt in a Day, is out now!

It took three weeks to destroy civilisation. It won’t be rebuilt in a day. 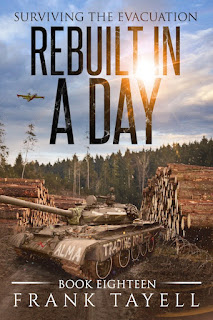 Ebooks should be available from Scribd, Hoopla, Overdrive, and other library and subscription services in the next few days.

A year after the outbreak, a sharp winter is followed by a sudden thaw. Spring has come early to Nova Scotia, bringing new hope. For the thirteen thousand survivors who’ve found sanctuary in northern Canada, and for the first time since the apocalypse, extinction isn’t imminent. But it looms large in the near future, a legacy of the nuclear war that destroyed civilisation.

As the weather improves, some survivors quit the small community. Even more plan their departure. The old-world supplies of food, oil, and ammunition have been consumed. More will have to be grown, drilled, and made. Medicine, paper, clothes: in a few years there will be none left to salvage. If it can’t be manufactured, it will have to be forgone. What knowledge can’t be preserved will be lost.

Humanity’s future appears bleak unless more people can be found. Hoping there is some truth in the rumours of a redoubt in Vancouver, an expedition to the Pacific is launched. The journey will be perilous as North America was ground zero for the outbreak, and for the nuclear war.

Set in Canada and beyond, as survivors from the Atlantic and Pacific meet.

A World of Magic 1: Work Experience (A contemporary comic fantasy set on the Isle of Wight, and in the very, very distant past.)
Life Goes On 4: A World in Flames
Book 19: From the Ashes
Life Goes On 5: The Repentant Billionaire
A World of Magic 2: Draco Australis (set in Dubbo, and in the Outback Dragon Reserve in NSW)
Strike a Match 4: Over By Christmas

While I had planned a sweeping multi-book arc for Surviving the Evacuation, I now think the open storylines can be wrapped up in two books (with a third to focus on Lisa Kempton, because I've been wanting to write her story for ages, but I can never seem to fit it in.) I won't say that Book 19 is the end, rather it's a pause to be followed by standalone stories set in this increasingly apocalyptic world (I'm absolutely determined that Jay should paddle a canoe down the flooded ruins of Wall Street, but that's quite a way for him to trek. I don't think he'll be travelling alone.). I have mapped out a few stories to cover the next 5 years (both for our survivors, and for me), but one year at a time, and I think 6 books is enough to be working on for now.

(PS, You'd think, having written all these books, I'd have learned a few lessons from Bill et al for use in our current pandemic. Well, I suppose I did - my neighbours are very upset about the moat I dug around my home, probably because I live in a flat. But while I did remember to stock up on tea before this current lockdown (phew) I completely forgot the biscuits. No matter what the internet says, you really can't dunk banana bread in tea.)