If Not Us (Life Goes On 4), the latest novel in the epic apocalyptic saga, Surviving the Evacuation, is out now. 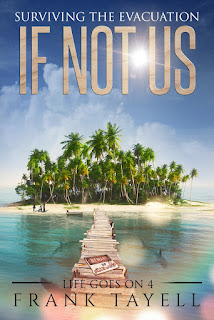 As the much-depleted United Nations meets in Canberra, the scale of the global catastrophe becomes clear. The tsunami left Brisbane a flooded ruin. Vanuatu has disappeared. The Madagascan evacuation has failed. Vancouver has been reduced to a radioactive crater. For as far west as Mozambique, as far to the east as Chile, and as far north as Canada, the world is a catalogue of devastation. From the Atlantic, there has been no news since the early days of the outbreak, four weeks ago.

As search and rescue efforts stall, the investigation into this ultimate war crime continues. With her misfit team of Special Forces and conscripts, Tess Qwong heads to Mozambique. There, a New Zealand frigate will take them into the unknown dangers of the Atlantic. But while they hunt the radioactive seas for the war criminals responsible for the outbreak and nuclear war, below the waves their enemy is hunting for them.

From Perth to Panama, from South Africa to South America, from paradise islands to radioactive wastelands, the battle against extinction continues.

This book (and all the others in the series) are available from libraries via Hoopla, Overdrive, and Bibliotheque, so check your local library. Most allow digital borrowing of ebooks from home. You should be able to get paperbacks from the library too. :)

My books are also available on the subscription service, Scribd.

Life Goes On follows large scale survival, focused on the Pacific, while Surviving the Evacuation tells the story of individual struggle in the Atlantic. While these stories are interlinked, and with character crossover, they can be read as separate series.

Australian Paperbacks - Good news. I recieved an email yesterday to say, from 19th May, paperbacks will be printed locally rather than imported. This means my books should be easier and cheaper -(printing costs plus the cost of a cup of tea.) In case you read any other authors (do they even exist?) this should mean all other print-on-demand books (essentially, anything other than mass-market paperbacks) should get cheaper, too. Woohoo! (though only a little woohoo, at least until the pricing structure actually gets revealed.)

Strike a Match 4: Over By Christmas
Life Goes On 5 & Surviving the Evacuation 19

While I do have a few ideas for where I'd like to take the series next (it begins with a father/son road trip. Thing is, I'm increasingly convinced George would insist on being the driver. He did run a bus company, back in the olden days. As for the Pacific, I'd like to write about Megacity Perth) I'd like to make sure I've concluded the current narrative arc before getting too far ahead with my plans.

(I will also, at some point, take a break from the apocalypse to finish one of the gazillion manuscripts I've been working on. But getting to Book 19 is now the priority.)