No Turning Back (Life Goes On 5) Out Now

In a post-apocalyptic world where food is treasure, pirates will kill for a meal. 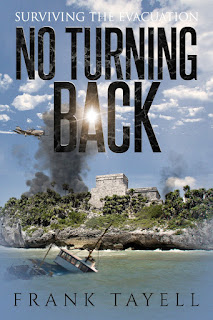 A month after the nuclear war ended, Commissioner Qwong and her crew of scientists and soldiers head north. Following a clue found in the logbook of a sinking ship, they search Mexico for a community trading safety for oil. As they follow garbled radio messages and breadcrumb-clues northward from one small band of survivors to another, a picture of the new world emerges.

Sinking cities and rising swamps, fallout-laden farmland and fire-ravaged homes, pirate-ridden coasts and zombie-filled shores: the damage is irreversible, and the rescue mission soon becomes an ecological survey, charting the spread of fallout, the location of inland craters, the growth of oceanic dead-zones, and the extent of coastal flooding.

Despite the increasingly bleak discoveries, a new plan emerges, a blueprint for a new haven and a new way of living, a new future for the last survivors of humanity. There is one last chance to save the species, a desperate gamble which will take them to where the outbreak began, and then beyond.

From the Caribbean to the Great Lakes, the full extent of the apocalypse becomes clear as the battle for humanity ends, and the fight for a new future begins.

Available from
Amazon UK https://www.amazon.co.uk/dp/B09MC37ZRN/
Amazon Canada https://www.amazon.ca/dp/B09MC37ZRN/
Amazon Thunderbolt & Sidnaw (& USA) https://www.amazon.com/dp/B09MC37ZRN/
Amazon Broken Hill (& Australia) https://www.amazon.com.au/dp/B09MC37ZRN/
Kobo & Kobo Plus: https://www.kobo.com/gb/en/ebook/no-turning-back-96
B&N: https://www.barnesandnoble.com/w/no-turning-back-frank-tayell/1140547789?ean=2940161082225
Smashwords: https://www.smashwords.com/books/view/1116483
Google Books: https://play.google.com/store/books/details/Frank_Tayell_No_Turning_Back?id=-BRQEAAAQBAJ&gl=GB
iTunes - https://books.apple.com/gb/book/no-turning-back/id1596654493
All books in the series are available to borrow, as ebooks, from local libraries using Hoopla, Overdrive, Bibliotheque, etc. This is about 90% of libraries now, and you can borrow without having to go into a branch. Check to see if your library offers this service.
They're also available on the subscription services offered by Scribd and Kobo Plus.
Audio will be recorded in December
Paperbacks are available now from Amazon. Please note, this is another long book (145,000 words, so twice the length of Book 1), as such the printing costs are much higher, and thus so is the retail price.
Coming Next: Surviving the Evacuation 19: Welcome to the End of the Earth
Surviving the Evacuation began a long time ago, when quarantines, lockdowns, and week-long hunts for toilet paper were purely fictional. Life Goes On 5 marks the end of Commissioner Qwong & Pete and Olivia's pursuit of the cartel, and so is the end of this series. Surviving the Evacuation 19 marks the end of that series, though it's not the end of these characters' adventures.
Coming in 2022 - After the Evacuation 1: The Scavengers' Guild. Set in California and Papua New Guinea (and elsewhere), a month after the end of Book 19, and staring Bran (among others, but I don't want to reveal anything that gives away the plot of No Turning Back or Book 19). While the scientists map the full extent of the environmental damage, and so calculate whether humanity has.a future, salvage operations begin in the old world's major cities. But where there is opportunity, there is corruption, crime, and revenge...
Also coming in 2022, Strike a Match 5: Valley of Hope - Please note, the Twynham Gazette's book of the month is Sherlock Holmes and the Valley of Fear.
Brawl of the Worlds: A First Contact Comedy
Hope you enjoy Life Goes On 5. Pete and Olivia's adventure was a lot of fun to write, even if it did result in me living on a cereal diet for six months.
Happy reading, Frank :)
Posted by Frank Tayell at 00:04